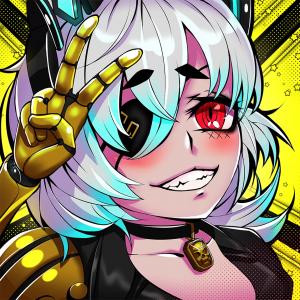 Yufi is a male to female satiric Virtual YouTuber who streams variety on Twitch and makes satirical content on YouTube.

Yufi started making VRChat content on YouTube 4 years ago, though most of her videos are now gone. After several ties with different communities Yufi took several long breaks from the game, before she returned to the game with a fiery passion and started stream and brought a name for her self as one of the first and best in the cybernetic history and model making.

Yufi model making history dates back 6 years according to some of her early streams and videos that can found. Making around 400 - 500 ish avatars for just her self, where as she also made countless avatar for other content creators; as well as friends. A total of 700 avatars, 6000+ hours in blender and unity together. According to Yufi, she was one of the people that brought the cybernetic theme to VRChat to spiral out of control, as well as being one of the creators of the Robo-neko, along side his well known avatar creator friend Askl.