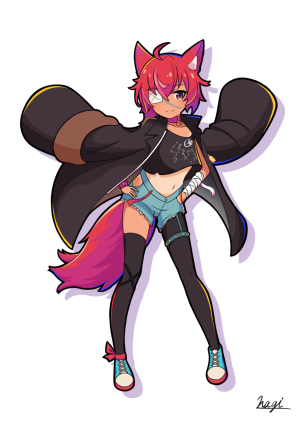 Yue is a wolf girl vtuber that plays a variety of games. She likes to stream single player games, and avoids puzzle games like the plague. Her streams tend to revolve around her being comically bad at video games due to unintentional and intentional scuff. She also has a tendency to get extreme cringe from time to time, but that is a feature, not a bug. Games played include Soulsbornes, MGS, Resident Evil, and really, anything that doesn't include the words "genshin" or "impact".

She also has a weird obsession with leaving cups everywhere for some reason.

Yue was found abandoned in a box on the doorstep of a cushy suburban middle class family. Gazing upon her adorable little cute eyes, they instantly fell in love and adopted her, raising her as one of their own, a human. Her formative years were rough, however, rife with calls home about chewed up backpacks and nap time blankies. This led to her becoming increasingly asocial and turning towards hobbies such as video games and anime to fill the void.

It was through this, that Yue realized her destiny; one not of subservience, but one of dominance and superiority. She was destined to become the one and only Wolfgirl Overlord, an Empress with no equal...

Several years later, Yue is now a vtuber/e-girl twitch streamer after being kicked out of the basement by her parents.