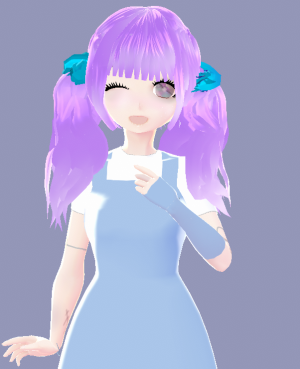 Faith Fade is a VStreamer from the UK. The doll was created on the 29th of April 2004 making her only 17 years old, She claims she's 6ft9 but it's been proven many times that she's 4ft5. Faith started out as a regular streamer who didn't know what a Vtuber was, she was encouraged by viewers to become a Vtuber and so she did that.

She's mainly known for her inspiring visual novel streams as she has severe dyslexia but despite that she always try's her best. Faith has a bright spirit and often spends her time trying new things such as learning to read, draw and play musical instruments on stream. Altogether Faith is a bright and young personality ready to share her unique mind with the world.

17 years ago a wooden puppet was made in a shop, this puppet was named Faith and she was sold for many years on a shelf. Nobody wanted the toy so they said they'd throw it away until one girl said she'd let it live in her dollhouse.

For 12 years they became very good friends. One day Faiths foot snapped, the girls mother said she was going to throw the doll away so Faith cut her strings and ran away. She searched all over the house for a place she could stay and soon found a printer to take cover but what she didn't realise is that the PC was turned on, all of a sudden this ball of electricity pushed Faith through a wire and into the main PC.

Faith has been in that PC for 2 years now and with every year that passes by Faith gets slower and slower along with the PC. Times running out a soon they'll scrap the PC and Faith will be no more. She made a Twitch account in hope that the girl will find her and get her out of the tricky situation. Until then Faith has decided to make a community that'll hopefully help others make friends so they won't be lonely like her anymore.