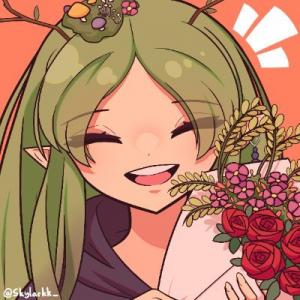 Yggy is a non-binary Virtual YouTuber who makes content in English. They are a variety streamer who loves playing open-world games. Pronouns: They/Them

Yggy is Yggy, that much is true. It's also true that they are born from the Yggdrasil, The World Tree. Yggy has existed for millennia, but only as an astral being. They've never really had a "physical" form as mortals know it. Yggy was never supposed to leave the Yggdrasil and come to the human realm, but here they are. You probably want to know how it is that they ended up here.

To understand how Yggy ended up here, first you need to know a bit more about the Yggdrasil. It's known that the Yggdrasil stands at the center of the nine realms, but within the Yggdrasil are 10,000,001 astral entities. 10 million of them are like Yggy with the astral form of the Yggdrasil as the leader. One million beings are assigned to watch over each realm, with another one million being record keepers. Yggy was one of the 9 million assigned to watch over the realms, or at least they were. Their primary objective is, or at least was, to watch for the signs of Ragnarök and document history. Yggy's assigned station was to watch over Múspellsheimr, the realm of fire guarded by Surtr. The liveliest station was always the Miðgarðr station, the one that watches Earth. Humans were always the most interesting to document. Now, they didn't all have to constantly watch over the realms, they were allowed breaks. During those breaks Yggy would go to the record keepers and and learn what's been happening on Earth and occasionally watching for themself. While watching other realms on their break was allowed, it was definitely frowned upon. On one of their breaks, Yggy snuck out and came to Earth myself. For reference, breaks are equivalent to about 30 years on Earth, but to them it passes by very quickly. Yggy took this chance to more directly watch humans closely, and possessing a body every now and then to interact a bit. When their break ended, they went back to Yggdrasil and resumed their assignment. From that point on, every break Yggy got they would go to Earth and each time it had changed so much.

Fortunately, Yggy's friends covered for them during their absence, but that couldn't last forever. Yggdrasil did catch on to what Yggy was doing and well, needless to say, they were not happy with what they were doing. Yggy's punishment was to observe Helheim for 50 shifts with no breaks. There they saw the souls of so many humans. When there was a massive influx, they knew there was another war. There were so many influxes...

After Yggy's punishment ended, they went back to their normal assignment and they watched dutifully. Yet, despite knowing all the wars that occurred, humans still interested Yggy. So on my breaks they resumed catching up on human history. Throughout witnessing all of the wars, Yggy noticed one thing remained: there was still joy. No matter what happened humans persevered and felt joy. One thing in particular stuck out to them though, and that was VTubers. Humans were very interested in these VTubers and they brought humans great joy.

Yggdrasil was not happy to learn that Yggy was still seeking knowledge on humans. They was to be "replaced" which, for astral beings, is one of the worst things that can happen. It would reset their consciousness and they would have no memory of anything that ever happened to them. For all intents and purposes, Yggy was to be executed. They had no choice but to go back to their original post and wait for their death. At least, that was their original thought. Yggy's friends really were the best. It's thanks to them that they were able to escape. They assured Yggy that since it would've been their first offense, they would be okay. Hopefully, they were right.

With their help Yggy escaped to the human world. When they arrived though something was different. This time, Yggy had a physical form, but at the same time it wasn't theirs. Yggy began to inhabit a human child. Now they are one and the same, though it took quite a while to get to that point. For years Yggy took a back seat and observed through their eyes. Their minds merged over time and they are now one being. This human and Yggy, fortunately, shared the same goal. They both wanted to see more happiness on Earth. To this end, they agreed that they would become a VTuber and that Yggy would embody the character of the VTuber they would create. It was then that the human and Yggy came up with the name that you now know as "Yggy."

Yggy came to Earth with nothing, but now they have a human family, a human job, human friends, and a name. They still think about their home of Yggdrasil, and they think of their friends who helped get them here.