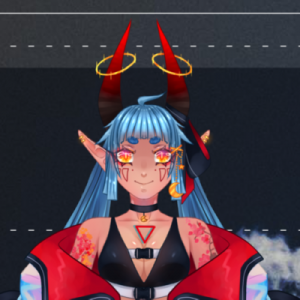 Yasha is an independent demon girl VTuber from the depths of the Inferno. She streams art and a variety of games. Her debut is due in october 2021! She is 222 years old, loves the mortal realm's aesthetic, her height is 171 cm, her zodiac sign is Aries and her pronouns are she/they.

Born from the infernal flames, a soul got split in two. One half banished to the mortal realm, the other assigned to be the guardian of pocket dimensions and overseer of supernovas- The Stellar Demon. She didn't always have that title though, she had to work hard for it, as she was only half a soul.

Having lived her whole live in the dark part of the inferno, she had grown fond of what little light the distant flames of hell gave, speckling the sky to resemble the night sky in the mortal realm. She was lost without guidance, suddenly spawned into this world, immediately seperated from her other half- her twin brother. For years she had been looking for him, in hopes of regaining some sense of self, sense of purpose. Once she found out her brother had been sent to the mortal realm, she did all she could to follow him there, she ranked up amongst the demons, created her own little pocket dimension - a safe haven that resides in her wings, a perfect home for lost souls that she lovingly calls her "little embers"- and eventually gained the title of a Stellar Demon.

Now being responsible of sending stars into supernovas and destroying worlds by those means, she looked for her brother all over, in every world whose star was about to be destroyed, but found nothing. Eventually, she found Earth. She couldn't get close to it yet since the star wasn't due to going supernova just yet, so she had to wait. Something inside her chest clicked- the space where her soul was missing a piece, it felt something, a presence? It must be him, her long lost twin.

And so, she researched Earth, all of it's history, cultures, and what is currently going on there, what's popular, all the trends, everything, and decided to start livestreaming in hopes her brother would one day stumble upon her streams and so, they would have found eachother again, until the Sun is due, when they can finally meet.