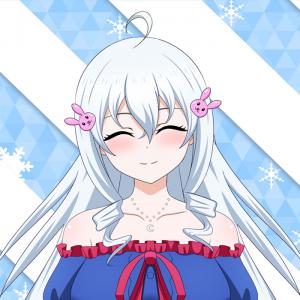 Xyrine Scarlet (サイリン • スカーレット) is a female Virtual YouTuber who makes content in English and Filipino. She is a bunbun VTuber from the Moon who loves to sing, draw, and play games. She is currently affiliated with a group of Filipino content creators called "EXOSIA Project" as an EXOSIA Virtual Angel.

Xyrine has a lot of different hobbies which reflects in her content. She produces song covers, original sound tracks, gameplay videos, short talking videos, ASMR, and she also live streams some games and karaoke. The games that she plays include rhythm games, RPGs, puzzle games (like sudoku), and more! Her favorite game is SOUND VOLTEX (SDVX)!

She started VTubing using a VRoid model on June 3, 2020 and her initial content was uploading recorded gameplays, but her laptop broke. She wanted to continue VTubing despite that so she started live streaming with her mobile phone using a PNG/GIF and a Custom Cast model up until December 2020.

After getting her new laptop, she started using an updated VRoid model which resembles her Custom Cast design and continued producing recordings and live streaming. She then updated this VRoid model and released a new design with a yet-to-be-rigged Live2D model during her First Anniversary Concert on June 3, 2021.

She is currently using a VRoid model which matches the design of her Live2D model while she is preparing for a Live2D redebut.

VRoid and Custom Cast Models / BGMs: Self-made / Made by Kuri-chan

Xyrine refers to herself as a "bunbun" (bunny) but her appearance is full human. This is because, despite being born on the Moon, her parents were humans and she was raised here on Earth by her uncle (who is also human).

She went back to the Moon once when she was 16 years old in order to find out what truly happened to her parents, but she doesn't remember anything from her journey on the Moon. When she got back on Earth, hundreds of years have already passed since she left. Thankfully, someone found her and took care of her; they treated her like family when she had no one.

She then found out about VTubers and started trying it out in hopes of having fun and improving her skills.