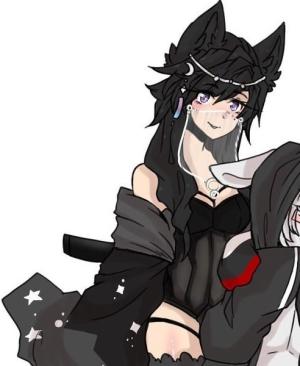 Moonlit is a Kitsune Vtuber that has an obsession for boba and Dead by Daylight. She is also a Demisexual and goes by the pronouns She/They.. She's expressed on how she wants to be the first Vtuber to become a Fog Whisperer for DBD. She strives to have a safe community and to make sure everyone is having a good time.

Moonlit was found as a child by a Chieftain and she was raised by him. She slowly learned from him how to use herbs for medicine, use rituals to speak to the spirits for answer, and she discovered her fox fire. She wanted to see more of the world and decided to venture as a traveler, she would earn money by doing fire dancing. Though during one the rituals an accident had happened and she fell through into a new world, our world, until she discovers how to go back, she found a new way to entertain people.