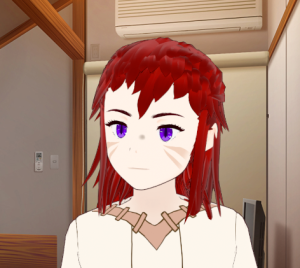 Xela is a female VTuber who primarily streams playing a variety of games, but also digital drawing, content creation, and general chatting. She has attempted and failed to become a voice actor and to finish a single Youtube video. She still attempts and mentions her progress getting nowhere though. Her atmosphere is a highly unprofessional comfort zone where conversation has little moderation, but she begs that everyone keeps things civil while enjoying themselves and not hampering on the experience of others. She has a habit of making people feel simultaneously comfortable in the space to relax, and uncomfortable due to the sometimes strange and TOS scaring things that she says. She excuses herself with entitlement as " She is everything, so she can get away with saying anything".

A human analogous thrown onto earth through a dimensional rift and trapped here until the world advances enough technologically so she could make another attempt to reach her home world referred to as Newlands.

Newlands is a World about 2/3 the volume of earth, but 1.25 times more dense and revolves around a blue star. It is habitable and lush green, a relative to earth. The politics of the world during Xela's time was balanced, mostly at peace with little tension as the independent nations are moderated by a large central nation referred to as the United International Federation of Newlands. Humanoid anthropomorphic animals of various mammalian species were the first to evolve in parallel with each other with advance intelligence and minds for logic. Humans were later created by these creatures- the humans referred to as Newlanders. After several further centuries of development socially and technologically for all specieal races - during Xela's youth - a tragedy struck during an experiment within a multi-axis mobius loop particle accelerator. A black hole uncontrolled was formed and started to consume the world slowly. Many efforts were made to contain and control the growing black hole which were successful. The original Xela, a hybrid Wolf-Cat Anthro, had worked her way up to site moderator during her prime. In her leisure she commissioned a clone of herself- a human who would bare the same name. They would take shifts as moderator of the facility they were assigned, trading lives. One day on the control site there was a malfunction due to a separate experiment being performed in efforts to test the limits of the black hole's containment. The site had collapsed into a rift, ripping half of it to shreds, and spreading the rest presumably across space and a multiverse.

Xela now roams unhindered by age hoping across realms in search of her home. Sometimes being able to immediately jump, sometimes having to wait decades before her next jump. Now on this earth she is again trapped due to the lack of technological advancement to take her on her next adventure. Appearing around 2008 she kept a low profile, observing society from a distance. She eventually started to develop a relatively normal life for herself before eventually coming in contact with her earth counterpart in 2018. She avoided him, watching from afar like a stalker. Until suddenly he approached her knowing exactly who she was. In his mistake they fused into one being, warping them into a combination of the same yet separate individuals. Xela being the dominant one slowly returned to her normal form, but her voice still wouldnt change from being combined with his.

She had been streaming as a hobbie for a while, but never fully dedicated. As of 01/09/2022 she felt society was open and free enough to accept her true self, especially that she actually looked like herself once again.