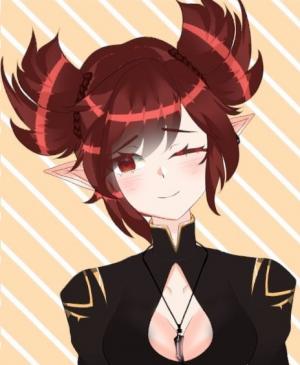 Vulca is a Vtuber that streams almost daily on Twitch featuring full "Let's Plays", team based First Person Shooters, and occasional Just Chatting. She started streaming in January of 2021, heavily inspired by Veibae and other members of VShojo. Vulca is frequently seen playing Apex Legends with her close friends in the Vtuber community but enjoys a variety of RPGs and Mystery games. She remains an indie creator at the moment, having graduated from her previous group, where she was a Leader, in August of 2021. She plans to expand her streaming to include segments relating to reddit, podcasting, and animation.

Currently, Vulca uses a bust-up model of her Elf form but is going through a "rebrand" and "redebut".

Family Life From birth, Vulca’s father has planned for her to be a Devoted for the god Vulcan. In her realm, non-godly beings can choose to dedicate their lives to serving a god. This can result in certain skills being given to them or favors from their god, or when they have accomplished enough they may become a Chosen. Chosen’s are the one Devoted that will serve as the god’s champion for deeds or challenges by other gods. If a Chosen defeats another, they will be granted certain things for their accomplishments.

Ever since she was old enough to hold the blacksmithing tools, she was working in the forge and training. By honing her craft she was able to provide the most brilliant armor and weapons for her kingdom, a war driven nation with the largest port in the land. Korinthia ruled over many other settlements thanks to Vulca’s creations. The innocent girl at the time had no clue what she was truly contributing to behind the scenes as the King planned more and more assaults on other nations, slowly conquering the land. Hard work every day barely gave her a chance to investigate, her only break were the saturday mornings that she spent with her mother.

Her mother, a half fairy half elven woman, was known through the nation for her skills in the arcade. While Vulca worked hard at the forge, her mother was setting records and teaching classic arcade tricks to the local kids. Only on those early Saturday’s when the morning mist was still in the air was Vulca able to be just like any other kid - having fun with her mother. She always had a knack for the games too, perhaps it ran in the family.

After providing for the nation of Korinthia’s army for 100 years of her Elven life, Vulca wandered into the dark castle of the King and interrupted a meeting. Prisoners of war, bloodshed, slaughter… all caused by her designs. She felt betrayed and powerless, realizing that all these years while her family lived in peace she was destroying thousands unknowingly. Overcome with rage, a new side of Vulca appeared. A side that craved the power to make her own decisions and use her craft for what she pleased. She fled the city, seeking somewhere new to settle down.

The Portal After fleeing the city and traversing the difficult jungles of the neighboring nation, that’s when she found it. The whirring noise and red glow lured her in, she saw the portal hovering in the air with a white light glowing in the center. At first she only stuck a hand through, admiring the warmth that rushed through her body from the other side. Soon her arm was through and she held her breath while she stepped the rest of the way.

On the otherside was a new world, one that was less advanced in technology than her own. She saw a city skyline in the distance and smiled to herself, knowing this would be just the place to make an impact.

The Tattoo As someone favored by the god, Vulcan, she was granted a familiar to guide her on her journey. This raven can transform into a tattoo as a means of hiding or travelling. Vedio, an old and wise being, constantly watches over Vulca with a fear that a parent has for a child. While not needing to keep her studies on track, he does need to keep her out of business she doesn’t need to be getting into.

Becoming Vulca the Bloodsmith Vulca has accomplished many things for the god she serves, but he has a test for her. “In order to become a Chosen (a champion that represents their god, each has one for major tasks) You must be weathered by the same flame your tools are, to prove you too can be forged by fire.” She has a long journey ahead of her, through a land ruined by lava and brimstone. The heat made the quest nearly unbearable, fire burning through her lungs and choking her. The lava began to feel like water as she sunk under further, letting it fill her lungs. She opened her eyes to the fiery depths and was stunned that she could see clearly.

A man’s back was to her, but she could tell he was tall and muscular. He turned to face her, “Vulca, my devoted. You have learned so much so in little time, it’s all I can ask of you. I’m about as proud a god can be of a devoted, actually… I love bragging about you. Let me do something for you, for your upcoming life and battles.” She felt hot bubbles forming around her body, almost as if tickling her. An itch sensation arose at her scalp but her body wouldn’t respond to what she was doing. She clenched her eyes shut, hoping it would end soon. “How much do you know about scorpions?” He paused. “Well, they’re pretty well known for their tails and natural armor. You as a blacksmith should really look into them more. However, I guess this gives you the opportunity to learn hands on.” He chuckled, and the bubbles faded away.

Vulca twisted around at the new feeling behind her, but something was always just out of her sight. Vulcan let out a hearty laugh. Recognizing this is probably what dogs feel like, Vulca stopped. She instead focused on the tail and moved it into her sight. It was oddly flexible but only at certain points and when she saw it she gasped in delight. The sharp stinger already looked like it was stained with blood, the golden body curved around her. This feeling… it was powerful.

“Say, what did you do to me?” She asked, suddenly more confident. Her posture changed and the tail flicked back and forth. Vulca reached up to her forehead, remembering the previous itch and pricked her finger. Crystals had erected from her skin, creating two sharp horns. She smirked and licked the blood off her finger.

“I’ve granted you some abilities, like a demigod. There are levels to being a devoted, the more you do for me… the more I do for you.” Vulcan explained nonchalantly, turning back to whatever he was working on.

“How could I… jump start the progression? One might say.” She hummed out, eyes focusing on the craftsmanship before her.

“Well, I doubt you’re the type to go start any wars.” His expression had changed when he turned to face her, suddenly it was dark. “But if you happen to run into any, make it long, brutal and by my name… be sure to win.”

She nodded innocently, but her god could see the look in her eyes. He knew he had made a mistake, but a promise was a promise - even if it created a monster.