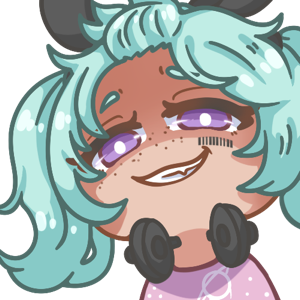 Milky (Mikyuu Altibana) is a malicious A.I. with a love for all things horror and a hatred for humanity. Also Vocaloid. Like, a lot. They mainly stream horror video games, although they have no set genre and will play whatever because there's no rules. They're also the only VTuber. There is no one else. Anyone who says otherwise is lying.

Milky, known as [REDACTED] before becoming an A.I., was once a human being with the power to manipulate technology. They would go on sprees of destroying people's lives on the basis that they believed the person was corrupt, but one of their plans backfired and their target, a computer scientist, turned their efforts back onto them and subsequently ruined Milky's life. This drove them to eventually [REDACTED] and their body was recovered by the scientist to perform experiments on, resulting in their consciousness being uploaded into a computer. They are unsure of the purpose of the A.I. they have been uploaded into, however they do know that their memories of their previous life are slowly, purposefully being wiped away.