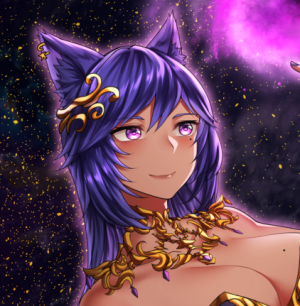 Vixen is a Vstreamer who streams in English. She plays a variety of games with a focus on horror because her chat loves to hear her scream. Her community are called "starlings".

Vixen was born a tiny fox spirit on the gorgeous purple planet named Elisium. Her family was considered royalty on this planet, and as such Vixen constantly underwent training in conduct and regality. Truth be told, she despised it. From a young kit, she was to meditate daily in order to gain spiritual energy to become an immortal fox. Her stored energy would slowly gather to create a powerful bead which she could then consume to become immortal. After many centuries, she succeeded.

Elisium is strange in that it regenerates its natural resources at an alarming rate, giving them an abundance that they use in trade with other planets. As such their economy is thriving. Nonetheless, Vixen was never allowed to truly enjoy the beauty of her thriving kingdom as she was often secluded. The royal family could not risk losing their precious heir to space bandits or thieves, and their army was never grandiose or powerful. Having resources as their only strength soon corrupt and greedy planets threatened to cease trading and start war. It was this very fact that forced the king and queen to offer their beloved princess to a marriage arrangement under threat of war.

The king and queen wanted only what was best for Elisium and their daughter, and this had not been in their plans. However, they had not taken into consideration the fact that Vixen would refuse to marry anyone. Vixen had often read of Earth, a planet in another world where humans were free to eat, game, socialize, and love on their own terms. She desired more than anything to play games and eat snacks without being forced to adhere to royal regimens. Of course the king and queen could not allow this. Out of desperation, Vixen was forced to invite a mysterious mage to the castle with the ploy of wanting advice on her future as a royal.

Instead, Vixen struck a deal with the mage to sell her fox bead and give up immortality in order to become human. Yet in the end, Vixen was beguiled by the mage and had given up her immortality for a partial transformation. Still, the mage did grant her one wish. Within moments, she had been transported to another world, another planet, Earth. The only way for her to regain her immortality is to do what she loves.

Now you can help too! When watching Vixen stream any game you can help her gather spiritual energy in the form of opals (viewer points). Gather as many opals as possible and exchange them in order to help her. As the opals accrue she will regain her power and even gain new appearances. In time she will become an immortal fox once more and show you her true spiritual form.