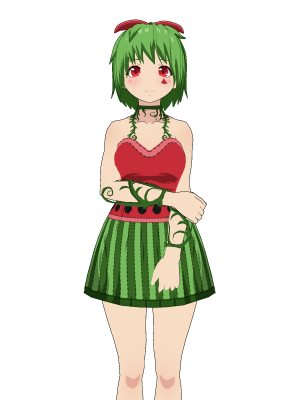 Viosmic is a female VTuber and VStreamer who makes content in English, but is also learning Japanese. She frequently plays Eternal Return: Black Survival at a skilled level. She also greatly enjoys sandbox and simulation games, however she is also very interested in RPG games. Occasionally, she will stream gacha games like Arknights or Genshin Impact.. Her streams are currently mostly chill, however her viewers have noted that she is very degenerate and not afraid to be a toxic gamer.

Her hashtags are #MeMelon for general content, #ArterMelon for art, and #VioMelons for NSFW art. She has stated that memes would go under either the #MeMelon or #ArterMelon tag, as memes are also a form of art.

In a world where magic and mythical creatures roamed, a watermelon was growing in a small, quaint garden. From sprout all the way to ripe watermelon, the watermelon grew. The melon was then harvested, and put into a picnic basket. For watermelons, being eaten isn't a sad fate, for it was far better than the alternative of rotting to death. At least by being eaten, a watermelon can bring some creature sustenance and potentially happiness before it finally dies. The watermelon was carried in its basket to a beach, where a group of lady knights were enjoying their vacation. The landscape was beautiful, and the lady knights were basking under the sun. Then, the commander of the knights decided to flaunt her strength by taking the watermelon that was so preciously delivered all the way from its former garden home to this idyllic beach setting, and she put the melon between her thighs. And squeezed. The watermelon was crushed, inedible, and finally, the melon's life was no more.

A voice rang from above. "Oh small watermelon, your fate was a disgraceful one for an upbringing so peaceful." The watermelon realized where it was, and with that realization came the shock that it was speaking to a god. The god then broke the silence, stating "I will give you another chance at life, this time as a human." With the end of the sentence, the watermelon lost consciousness.

When she awoke, she was in a field that sprawled as far as the eye could see, the soft sunlight beaming down onto her. She was now on Earth, with a human body. She was isekai'd from what Earth humans would call a fantasy world, to this new world controlled by technology and complex societies.

With her naturally green hair and red eyes due to her past life, she frequently stuck out in any environment other than at anime conventions and the like. After getting a grasp on technology, she quickly found solace in virtual communities, where others looked more similar to her. Due to this, to try and acclimate more to Earth, she has begun to explore the world of online gaming and online communities more.