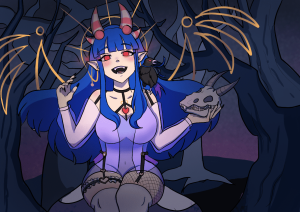 Corruption Dragon | Resident of the Gardens in H3ll

A long long time ago, Dragons used to be born from the Stars. However after many years, the Stars just stopped giving life to dragons and species started going extinct. After 80 thousand years, the Stars shone brightly and a new dragon was born. The first dragon since the Stars stopped, she was considered a gift from the Gods.

And a gift she was, for she was a Corruption Dragon, an extinct species. Since she was the only one of her kind, she was very loved by the Stars and Heavens above. She was told her role, that she was to corrupt all the timelines and create more of her kind. In addition she received a title, the Queen of Corruption. To others, she was seen as a curse, a Harbinger of Chaos & Calamity. Her name was given, Veyrhea Heart, known as Rheya for short.

She didn't mind the titles or names given to her, from birth she carried out the role she was given, as it was all that mattered to her. During her time as a young Dragon, a lonely Ice Dragon stumbled across her and decided to adopt her as his own. He told her to call him Uncle, and he raised her for a few years. During this time, he gifted her a pet bird, so she wouldn't be lonely on her own. However one day the dragon disappeared, no trace of him was left behind.

The young Dragon missed him, but the Stars she had no time to mourn. And so life went on. She grew older and grew tired. Each and every day she did what the Stars asked, as exhausting as it was. Eventually one day the Dragon snapped. She confronted the Stars, refusing to continue to fulfill her destiny. They were angry with her, and forced her to continue her role.

So she continued to oblige, but in her free time she planned her escape. And then on that day, she ran away. She fled to a timeline and hid, covering it in Corruption so she couldn't be traced. She also created a copy of the timeline, hiding it in a pocket of Space to be a distraction, should the Stars find her. This timeline was called Asteriya, and Rheya now called it home. However it would be difficult to hide from the Stars above, and her arrival alerted a team of scientists. These scientists found her strange, like an anomaly, and wanted to learn more. She was scared and so she fled downwards into the pits of H3ll.

She didn't stop until she reached Nine, the lowest of all Circles. Rheya took up residence in Nine, and upon moving in flowers began to bloom all over. Nine became dangerous, however the residents of the other Circles didn't seem to mind. She sealed away her True Form, creating a vessel for it to reside in. She then created a more normal looking form for herself, so she can traverse above on Earth.

And so Rheya lived peacefully, able to rest and relax for once. During her time, she discovered music and anime. And from anime, there was VTubing. Rheya found it delightful and decided to take it up as a hobby. Since then, she's been hiding in the Gardens, only coming up to the Earth's surface during the day, and returning home at night to sleep and stream.