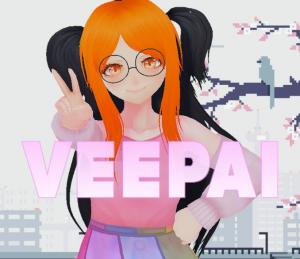 Veepai is an 18+ English Virtual Streamer on Twitch. She plays games such as osu!, League of Legends, Minecraft and more. Although sweet, she loves to tease her regular viewers. She's always clumsy and occasionally lewd.

Veepai is the owner of her towns local cat boy maid cafe. Originally opened as a cat girl maid cafe by her great grandfather, she faced opposition from her family when she decided to throw cat boys into the mix. Her favorite dish to serve are the steamed pork dumplings with taro boba tea. The cafe also doubles as a gaming cafe which is where her love for games spawned from.

She's made many friends during her years at the maid cafe. Mainly HoneyPupSenpai, an orphan she found hiding in the cafe one day when they were children. Her and Honey got into a lot of hijinks together and Honey still works at the cafe to this day.