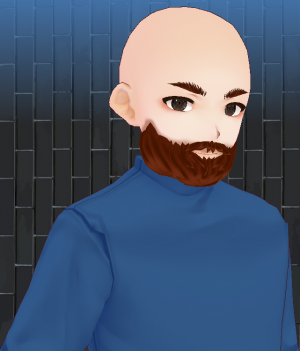 Created inside a Virtual Environment, V-Red is the digital representation of SecretRedBeard, also known as Red. He shares his appearance, and personality, with the exception of an overwhelming urge to live inside a dumpster. V-Red has no hair, but sports a red Beard. He has brown eyes, closer to black than hazel. He also wears a blue long sleeved shirt, and a pair of black pants.

At the time of his creation, V-Red was designed to be a simple stand in for his creator, in the event that his creator was not in a presentable state for broadcast. In time, however, with the development of what is now called his "Dumpster Persona", V-Red has gained more self reliance, and was trusted to broadcast by himself without the intervention of his creator.

V-Red's persona is a foul mouthed, dirty minded, young adult. He enjoys playing games of Strategy, or building simulations such as Minecraft. He also partakes in the creation of Maps and Scenarios for the Tabletop Role-playing Game, Dungeons & Dragons, and can often be found in the morning doing just that.

In addition, V-Red has been known to care deeply for his friends. His mental state can be effected easily by the moods of those around him. This has been accredited to the Creator's own mental state, described as "Carrying the World on his Shoulders." In short, V-Red is cursed with caring. As such, he will go out of his way, (often to his determent), to accommodate requests or support a flagging ally. He is a staunch believer that every being, man or AI, deserves a fair chance to make their mark on the world, and he will do everything in his power to help them do it.

Early in his creation, V-Red's code was corrupted. The error occurred in his memory, and often causes loops of music to emit from him. Upon hearing a trigger word, V-Red will search out a song containing said word, and begin singing the line of the song repeatedly until made aware, or another song is triggered.