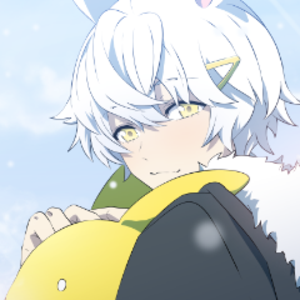 Uzuki Tomoya is a male English Virtual YouTuber affiliated with Tsunderia's 3rd Generation "Tsundream", alongside Tsurugi Nen, Chikafuji Lisa, Tetsuya Kazune, and Amiya Aranha. Tomoya has a pair of bunny ears set atop flocculent white hair ornamented with a pin. His attire consists of a fuzzy parka, a scarf, a sweater, and plaid slacks. He is often pictured clutching his companion, Meep (or at least one of the many Meeps). On 6 November 2021, Tomoya made his Youtube debut. Tomoya's fanbase is officially called "Tomoyachi"; a pun that combines his name "Tomoya" with the Japanese word for friend, "tomodachi" (ともだち).

A marshmallow bunny who loves to sing and make others smile.