Ube on the Mic 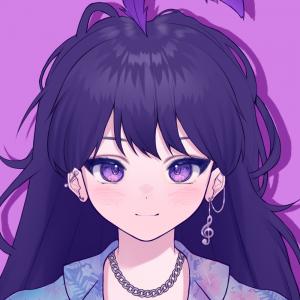 Ube on the Mic is a virtual artist and content creator. She is a fully independent artist; songwriting, producing, mixing, composing, singing, rapping, and performing all of her own original music, from alternative hip-hop to orchestral soundtracks. On her Youtube page, you can find fully edited videos and music. Everything from stream highlights, to original songs, to covers and remixes can be found there. On her Twitch, she can be found often playing video games, on her own or alongside friends. She has been playing one of her favourite games, Super Smash Bros Ultimate, at a competitive level for over a year, attending tournaments and gaining notoriety in her local scene. She also loves playing Tetris at a competitive level, and occasionally speedruns Minesweeper. However, she will often play whatever she wants, and doesn't restrict herself to those games.

Ube is a bird from another world who was fed up with the ancient traditions and tastes of her flock. Being the only one not talented in singing, she turned to rapping, lyricism, and production for her musical talents. She soon discovered the internet, and quickly adopted the pop culture of our world, from movies to games to fashion. Now, she resides in our world, climbing her way to the top, and maybe play some games and make some friends along the way.