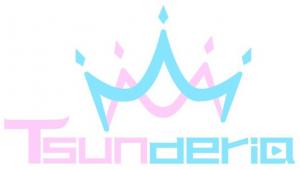 Tsunderia is a US-based VTuber agency. Their goal is the production and development of VTubers and quality entertainment through creator support, including management of daily streams, assistance with initial design and further development, engaging content creation both physically and digitally, promotion with channel growth and brand identity (including promoting VTubers to the Western market and expanding the industry), and support through resources such as AR and VR technology.

They are partnered with VTube Studio, an app for face tracking and animating Live 2D models. They are also one of the earliest known US-based VTuber companies.

Tsunderia's Twitter account was created in April 2020, and their first talent, Kamiko Kana, debuted on 4 April, 2020. A week after her debut, she announced she was part of the new company. She was followed by Inukai Purin on 26 June, and Hoshino Charlotte on 27 June, forming the first three members of the company as gen 0.

Check their group page to see which VTubers are connected to them.