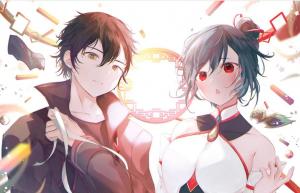 Tsubasa is a Virtual youtuber whose content consists of them playing a random assortment of games on youtube( mainly likes to play anime games), while chatting with their audience, they are also a male using a male/female avatar.

He is just a regular human.

he has a mask as well but he does not use it that often.

He is an fan of anime/manga/games. He likes super robot series from the animes and the games. there is many genres of series he like. he likes seasonal anime. He likes villains from these.

He doesn't really talk much. he is an introvert.

He has a few close friends he talks too.

He may seem boring to some people.

Yozora is Tsubasa Alterego persona. she contains the personality of the kindness and the sadist side Tsubasa has within him.

She was an image base on the female Villains from games/manga/anime that Tsubasa liked.

She can be manipulative and can sometimes could be acting. She takes things seriously when angered or things don't go her way.

Her looks may be deceiving sometimes.She may look evil sometimes but it was actually base on Tsubasa preference.

She has her 2 mask to make her look cooler and also base on the image of the female villains Tsubasa liked.

She is very kind to those she likes and those she consider as friends. She is like a sister to Tsubasa.

She likes it when her opponent does not win or when she watch them suffer for doing something that makes her laugh.