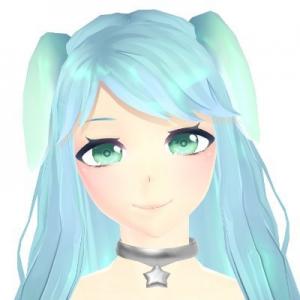 Trina Wylington is an UTAU Turned Virtual YouTuber who officially launched on 4 November 2019. Trina is often called puppers and is known for her voice acting and singing. She has read Howl's Moving Castle on her twitch channel. She has openly talked about her mental illness and how it has affected her, coming out about her borderline personality disorder during COVID-19 Quarantine in the US. Her birthday is 20 May 1996. Her height is 168 cm (5'6"). She weighs 73 kg (160 lbs). Her zodiac sign is Taurus.

Trina Wylington was born to Leslie and Michelle Wylington on May 20th 1996. She was their second born and was deemed to be the next Princess of The Stars. As Trina got older her tail had been much larger than herself and so it dragged on the ground as she crawled and walked, creating a bald spot on the bottom of her tail. She was often teased for not only having a large tail but also for this bald spot. Trauma from the constant harassment and physical abuse from her classmates resulted in Trina having multiple mental and physical health issues. At the age of 16 Trina's abilities for her title of Princess of The Stars appeared within a cluster of stars on her abdomen. These stars, unlike her sister's, only appeared once her abilities activated. Trina's training began immediately. Her sister had been training to fight for years as her abilities had appeared the same day Trina was born, as she was the one who was the Knight of The Stars and was supposed to protect the Princess. Trina's abilities were to control stars, able to move them and create new constellations. She also could create new stars and hurl magical balls of energy at enemies. If she dies all the stars in her universe would go out, including the sun, and life on earth would cease to exist. Which is why Trina, Lola and their friends Starlight and Ari help them battle evil spirits, demons and monsters through out the world, to protect not only their planet, but the universe.

-About Wereanimals- You may be wondering "What on earth is a wereanimal?" or at least what they are in this case. The explanation of a wereanimal is pretty simple, a wereanimal is a human being who has been infected with the wereanimal virus. This virus contaminates the DNA of a person and turns them into the wereanimal that the virus is contracted by. The way you get the virus from an infected animal is different depending on how you interact with the animal. Snakes for example, will bite and inject venom into a person, the person will be immune to the venom if they have been infected with the virus because they have now obtained the DNA of that snake, including the ability to not be poisoned by it's own species' venom. Though humans who are infected after birth usually do not show signs of being infected aside from things such as communication with that species (And similar species) and being immune to the same things that the animal is immune too. When a human is infected and after gives birth to a child (Males must be infected before insemination of course) the child will have physical appearances and capabilities of the animal they are connected too. These are the true wereanimals. A child usually is born with a physical trait related to their animal, such as a cat's ears and tail or a snake's eyes. A child of a species though will always have the same trait as other infected wereanimal's species. If you were born infected with the virus of a snake you will be born with Snake like eyes (though you will still have human eyelids!) and slightly longer "fangs" that contain your species' venom, whatever it may do. Though you would be able to control releasing the venom and will not have it until you would be able to control when it is used, usually it kicks in around the age of 10 years old. A distinctive trait is transferred between cat, dog and rabbit viruses where the child is always born with abnormal colored hair and ears and tail. This trait was to show the difference between wereanimals and halflings (Humans born with animal ears and tails, majority being cats) though there is currently only one recorded wererabbit ever being born and it is unknown if there may have been others that appeared as halflings.

What is the difference between wereanimals and halflings? Wereanimals have the ability to transform into the animal that they have obtained the virus from. This can also depend on the species it is which can determine coloring shape and size of the animal. For example, if you were born a python snake, you would change into an actual python, and not a simple garden snake. Halflings can not change form and simply just have certain traits if their animal like sleeping a lot like a cat or being hyper like a dog. Usually there is not a clear breed that halflings are since the majority is mixed from being a scientific experiment. Unlike wereanimals which were generated naturally by mother nature.

Do wereanimals have anything to do with werewolves? Yes! Werewolves were the first string of wereanimals to come into existence, though they were poorly chosen. The animal who had given the virus to so many humans had rabies, which turned the werewolves into the nightmare we know them to be in our world. The werewolves attacked humans without knowing they had ever been infected. When they learned of what they had done, many had committed suicide, ending the majority of the werewolf population, the rest went into hiding and learned to control their powers. When the demon of the virus was active, it just so happened to have been the night of the full moon, lore began to spread and that is how we gained our tales of the monsters known as werewolves. The story about werewolves only changing on a full moon is a myth because the night of the full moon, the harvest moon to be exact, was the biggest slaughter of mankind by werewolves.

What happened to the werewolves? Werewolves live in hiding still, as they are still treated poorly by all species. Even though they have learned to control their demonic side, it did not change the fact that their ancestors were mass murderers and everyone still feared them snapping.

Do other wereanimals go crazy and turn into demons? Yes, but the cases are rare. Once they invented the rabies shot, humans and animals started getting them as a shot along with the chickenpox and measles. It wasn't required for human children, but many parents still took the precaution in case their child became infected or converted in the future. Another cause of the demonic side coming to light is when the wereanimal had gone through such abuse to the point of insanity. This not only ruins the mental state of the wereanimal as a human, but creates a very powerful monster that can appear at any instant without warning and the human inside does not have control over it's actions, the same as any other rabid animal.