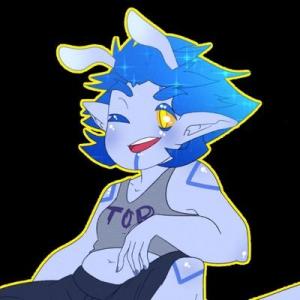 Tribs is a VTuber and Streamer who makes content in English.

Tribs is an alien EN-VTuber! They mostly play games with friends on stream, but will also hold art raffles for hitting milestones and stream the art being made.

As of 02/17, Tribs is now freed from Twitter prison, and is back on @VTribbean.

Tribs was born on a terresque planet labeled T-R18. It was a fledgeling planet discovered in its early stages of development and experimented upon by an intergalactic science team. Their goal was to take the DNA of ancestors or other creatures that didn't quite survive on their own planets and implement the genes into the developing creatures of the planet to see how they would grow.

Tribs's species was one of the more sentient groups, soon growing into a lax society, respecting the lands they lived in and being gifted technology from their overseers. Unfortunately, the science team stopped visiting one day, and T-R18 was no longer under their protection, leaving the planet ripe for the taking for scavengers, poachers, and opportunists. As only a child, Tribs was captured and forced to perform in a travelling freak show for their childhood.

This was ended by a mysterious voidfolk, Silhouette, who saw a now matured Tribs broken from years in captivity. Silhouette broke them out and helped to rehabilitate them, Tribs becoming her most powerful ally. Tribs and Silhouette were now a dynamic duo, joining in with a federation called the Statostadt as runners and scouts. Tribs now developed a newfound love for piloting, fistfights, and troublemaking - partially to Silhouette's dismay.

In their time with the Stadostadt, the two gained the interest of a mysterious being known as "Iris", or the Contractor. The contractor employed them with a simple job: keeping an eye on her "vessels". Tribs would occasionally have to cross the multiverse to check in on different people who lived ordinary lives - an odd task, but one that paid well. The pay got even better as the Contractor introduced a new job on another terresque planet, T-G5M.

Tribs and Silhouette were quickly dispatched to T-G5M, glad to collect the pay as soon as possible in order to free their AI friend, Halley, from her robotic body. However, the mission was a bust as their ship was struck down by rogue asteroid while prepping to land. Tribs was quickly discovered by that planet's version of the men in black, and it was revealed that Tribs's rough landing mistakenly killed a citizen named JJ. Rather than being punished and held captive again, Tribs pled with them to offer their services instead, to which they agreed. Tribs now took on the guise of JJ, disguised as a human in day-to-day life in order to seek out other interplanetary invaders to send them in for proper questioning.

Life went on like this for a while, until the Contractor contacted Tribs out of the blue again, this time with a new and easygoing offer... to provide entertainment across the multiverse.