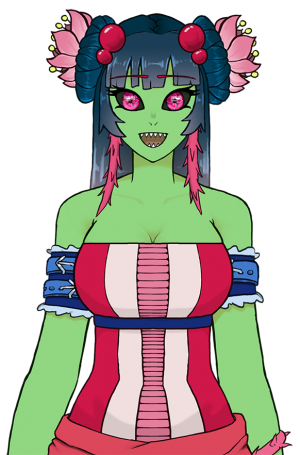 Lotus is a plant Virtual YouTuber that streams in English. They are plural and use they/them. Most often they will stream fighting games, but also do drawing and learning streams. They are 183cm tall. Lotus's Vtuber model was both illustrated and rigged for live2D by Lotus themselves.

An aggressive mimicry ambush predator carnivorous plant that tricks prey into its trap with a humanoid lure. Upon discovering the internet through memories of one of the consumed, they decided to try luring prey by becoming a Vtuber.

There were four previous iterations of the Traptress lure throughout history, the first one is known as the Beckoner and appears as a woman in the woods from medieval times. As times changed so did the lure to properly convince prey to come close. The second lure is known as the Dame, has the appearance of a beautiful woman from the early 1900s. The third lure known as the Bombshell appears like a pretty rural style woman. The fourth and final lure before Lotus was known as the Survivor which has the appearance of a modern business woman that survived in the woods after a crash.