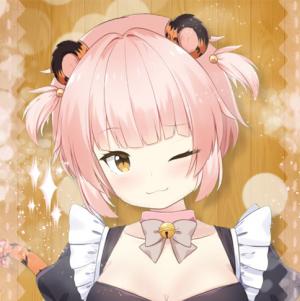 Tori is a Tiger VTuber that loves to cook. She spends her day conjuring recipes to share with all her GAO-pals whilst keeping a positive and playful atmosphere. Her goals are to teach everyone in the V-Tubing world how to cook as well as to consume every other prey-animal Vtuber she can find.

Tori was born within the safe confines of a sanctuary in the forests Thailand. As a young and growing cub, would look forward to her daily meal times.

As a young tiger she was moved as part of a conservation project to England, United Kingdom at a undisclosed zoo. Watching and learning how humans were like Tori lived a carefree life...

Until one day, a visitor to the zoo wanting to get a reaction from the tiger threw a fried chicken drumstick into her enclosure. Unsure with what to do she did her best to avoid the tempting treat. That was until she got a whiff of the delicious smell of the 10 herbs and spices within that one drumstick. Unable to hold back, Tori gorged herself and since then her life was changed.

Unable to forget that delicious taste and imagining the other wonderful meals of the world. Tori made her great escape from the zoo. Though the hungry tiger soon learnt that free-roaming apex predators. Unable to eat the meals she craved so much, Tori encountered the magical English fairies she would hear in folklore - They found her plight amusing enough to grant her temporary abilities to turn -partially- human for small portions of the day so she would be able to do all the things she was not able to.

Thus the hungry tiger ventured into the human world as much as she could, finding it hard to befriend others due to her ever shifting form. Tori found the world of V-tubing, an ability to meet others even with her large paws.

Thus Tori the Tiger sets her eyes on being the best V-tuber Cook in the world; All while filling her stomach with the world's most wonderous meals.