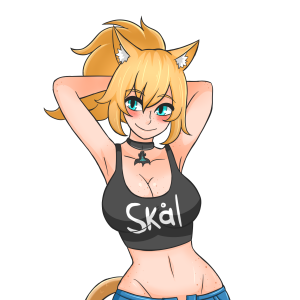 Thor Chan, or Tori, is a VStreamer on Twitch.

Tori is a blonde cat girl with freckles on her face and chest. She usually has on a shirt that says Skål or "Cheers" in Swedish. She can be seen primarily in VRChat. However, she is known to play other games as well. Tori is part of Team Hope, a stream team on Twitch that spreads positivity to everyone they can.

Tori is Swedish Demi-Human girl that moves to Japan because her parents business are starting up operations there. Being a blonde haired blue eyed cat girl, she is very popular in her new school. One day she volunteers to clean an old shrine nearby and while there she feels like something is calling to her. And not far away she finds a boulder with a prayer rope wrapped around it. Tori notices something on top of the rock and reaches up to brush some moss and dirt off of it. She quickly notices a few of the Norse Runes on the side of this object. She grabs what appears to be the handle and lifts it with ease, as though it weighed almost nothing. The boulder cracks and the moss on the object seemingly burns away as the hammer reveals itself with a faint glow on its enchanted runes. Thunder begins echoing throughout the skies as she admires this relic she’s found. Suddenly, as she was holding the hammer up over her head, a bolt of lightning cracks the sky and strikes the hammer. She quickly closes her eyes to shield them from the blinding light. When the flash ends she opens her eyes. Tori notices that her clothing has changed into this Asgardian style armor from the myths of old. She realizes that this relic was not just any old hammer, but in fact the one and only Mjolnir, Hammer of Thor. By being deemed worthy and lifting the hammer she now has the power of The God of Thunder. Tori decides to keep this a secret from everyone, if only to protect her friends and family.