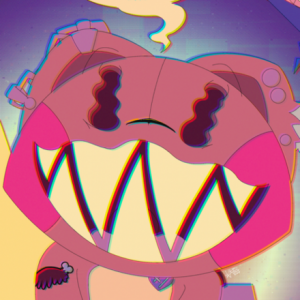 TheVelvetOutlet is a bigender Virtual Streamer who creates content on Twitch in English. They typically play a variety of games while making conversation with chat with the aim to bring a good time and make friends. They're pretty chill and laidback but can be quite loud and high-energy at times. They absolutely love milk and saltwater taffy. They joined the VTuber community in 2020 without a debut.

As the world rots away and all life upon it drowns in their own anguish, an immense power had awakened, and four metaphysical beings graced the Earth: Mind, Body, Life, and Death. Each of them plays a role in the state of the universe, but their rivalries had caused them to neglect their responsibilities. With the weight of existence and fate itself lying on their shoulders, they crafted a plan to help them settle their differences. If they could learn to get along as a single entity, then they could work in harmony to maintain the infinity before them. They each pieced a fragment of themselves together, and in doing to, brought forth a new being- a new life. They called themselves Soul.

The four had never actually walked the mortal plane or interacted with it directly before. Even as they opposed one another, their duty was too important to abandon over a simple skirmish, let alone to go sight-seeing on some planet. But Soul could explore solar systems they'd been watching over for billions of years, including one with the most advanced planet they'd ever seen: Earth. That being said, the humans didn't find Soul's pure form... particularly inviting. Just gazing upon it drove them completely insane. Soul needed to find a way to interact with people in a body humans loved. Then they found stuffed animals. Children cuddled them. Adults exchanged them as a sign of love and care. People of all ages collected them and kept them on their beds! It was the perfect body to inhabit! So Soul found a nice, big teddy bear sitting on a store shelf, climbed in, and waltzed out onto the streets... to become a STREAMER???