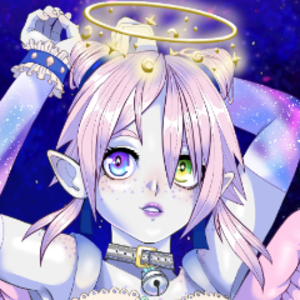 Lesath is an English-speaking non-binary virtual streamer and content creator. They are currently a gaming variety streamer with a focus on story-rich/story-heavy games and a preference for RPG's, visual novels, survival games, and traditionally 'comfy' games. They have been branching out into other gameplay types recently and taking comfort in the traditions of their cats interrupting streams and snuggling. They have also spoken several times of hoping to create a TTRPG Vtuber group and are in active discussion with others about it.

In the long lives of stars, many of them pick up strange habits. This red supergiant has chosen to give every other star in vocal range a silly nickname and is about halfway done. That binary system bickers about philosophical differences and gossips about cross-spectral romances.

About 580 light-years from Earth lies a blue-white subgiant whose hobby is observing our home planet and its changes since the early Miocene period. All the wonders and ills of humanity, they watched, captivated and entranced. They smiled as we named them, Alascha at first - with a mistranslation and official naming of Lesath later - and a designation of υ Scorpii. They fell deeply in love with all we could be as we developed into who we are now.

One day, inexplicably confronted with the swiftness of life as a B-class star - a lifespan of some 50 million years is very short when there are stars with lifespans into trillions of years - and staring across those hundreds of lightyears towards Earth, they decided to find a way to safely walk among the humanity they so adored. If they only had so long to live, even if this shortened their lifespan, this would be worth it. Life as a human! Seeing things as we do, and not from a star's perspective. It would be wonderful, they knew.

It was not a simple process and, in many cases, they can't even begin to try explaining it, but they never gave up over the hundreds and thousands of years it took. They found a way to project their higher mechanisms of thought and rationality and kindness and emotions into a package of energy transmitted to Earth and then distilled down into malleable matter, leaving behind enough to continue the mechanisms of running the star itself.

They landed in the forests of southeast Michigan in the United States, overwhelmed instantly at the intensely intimate sensations of life against newly minted 'skin' and the very pulse of the planet beating against their freshly sculpted senses. To say it was an adjustment would be quite an understatement. It took them several delirious weeks to regulate and dial in the sensitivity of the matter they inhabited to a level that did not drive them to reeling madness. This, unfortunately, cut them off from the infinite song of the cosmos, and they were plunged into desperate loneliness never before even imagined.

It was in this state that Lesath encountered their first residents of Earth, who took pity on the understandably curious and miserable creature, and discovered the form they'd subconsciously chosen was... not quite normal. The hair could be explained away with dye, the pointed ears a plausible surgery, the freckles' shapes and shades as a tattoo... such body modifications were extreme, perhaps, but not unheard of. The skin that faintly mirrored the luminous shade emitted by their true form, the aureole glimmering and floating above their head, the wings sprouting from their back... these belied any chance of attempting to masquerade as human.

The pair did not turn them in to authorities. Nor did they treat the angelically shaped being with anything other than kindness and patience and love. For a week, the star remained silent to their queries and conversations and offers of food, though they did allow assistance with grooming and accept clothes altered to fit around their wings. Near exactly to the minute of their discovery, they finally spoke with soft words of gratitude and an apology for the silence. For all that they had absorbed the languages of the Earth through that omnipresent song, being cut off from it had forced them to recall from memory what words were and train internal organs to form speech.

These two taught Lesath a great many things about humanity over the next years they housed and cared for them. Before long, the star had learned to obfuscate the signs of their celestial form, altering the reflections and wavelengths of light about themselves to show a heterochromatic pink-haired Caucasian with normal freckles, normal-enough pointed ears, and an infectious smile. It was exhausting to do, and they learned about disabilities and chronic pain when overuse caused horrific migraines. They learned about a mental illness called anxiety when being in a crowd made them unable to speak and then start sobbing when addressed. These were human words for human conditions, but the star grew to understand them in their own way. Being around anyone but the pair who found them drove them to panicked breathlessness and tenuous holds on their ability to conceal themselves. Torture really, especially for a being who came here to experience humanity.

That was when the pair introduced them to the internet. Despite the murky darkness lurking in the vast digital space, they quickly grew to love it. The capability to carefully choose each word as text! To step aside and not respond to a message for a few minutes or an hour or a day! They could interact with people other than those they now called beloved and family, finally. They didn't have to hold carefully to threads of light to be a certain way for them.

Within a year, they had made several friends - a catgirl with an odd affinity for water, a descendant of one of Earth's famous authors, a writer whose words spun love and destruction into awe-inspiring epics, and others still - moved to the immense and bustling city of Houston in a further attempt to desensitize themselves to humanity's noise, and had learned of vtubers. This was yet another amazing opportunity for them, they soon realized. Vtubers could be quite literally anything. The star had seen lamps and toasters and devils and so many other mythological creatures. Their digital form could echo that of the celestial angel they now were. They could be themselves, in something approximating the public eye, and interact with all kinds of people, all while still maintaining a protective buffer.