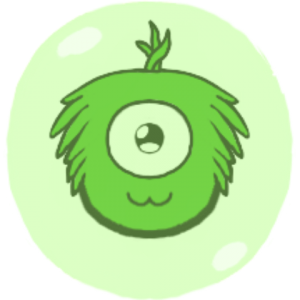 A male vtuber who plays videogames, makes art, and hangs out with his viewers. he only understands English but hopes to speak Japanese someday. he is an independent vtuber. He is green, fuzzy and has one big eye. He attempts to keep his channel family friendly but that doesn't always work out, not due to him, but due to the people he collaborates with. He is very friendly and seems to enjoy sweets.

Around 210 earth years ago, Fuzzy coconuts was awakened from a spore.

He is of the Race Fauxconut (termed that way on earth due to their appearance resembling a coconut shell from behind when they get on in years.) he may be 210 earth years old, but compared to the lifespan of a human he is somewhere between 18 and 21.

Fauxconuts do not have the concept of sex or gender on their planet. they reproduce in groups of 5-7, releasing around 500 spores each onto the side of trees on their planet (it resembles moss) most spores don't survive, however the ones that do are later split and claimed by their parents to raise alone. Usually the parent each get one or two children to raise. in this case Fuzzy has a sibling.

again, gender is a foreign concept to fuzzy. they identify as a male, but they have been known to cross-dress. not as a symbol saying "boys can do this too" but more as a confused creature that doesn't understand the culture of the planet they are on 100%. Not saying they don't believe anyone can be whoever they want, they just are a tad confused which adds to their charm.

20 years ago, Fuzzy's family of 3 went to earth as tourists on a vacation away from home. when they arrived they quickly realized that they would not be accepted publicly and was told by the government that if they want to be here they must lie low. Since then (after countless negotiations), the government has decided to be a little less strict. they still cant go out into public, but they may go on the internet as a digital representation of themselves. Fuzzy jumped on the opportunity and opened up TheFuzzclops channel.

Fuzzy's race (the Fauxconut) have telepathy (being able to talk amongst themselves via their mind) however, humans don't have minds capable of such, so Fuzzy uses a little speaker to communicate with humans if he ever needs to.

Fuzzy doesn't exactly have appendages, but he does move around using telekinesis on himself.

Fuzzy is often seen floating in a bubble. this bubble is comprised of mucus that his mouth excretes. the mucus is made out of access nutrients that his body doesn't need at the given moment. Its quite temperature regulated and can withstand outside forces of roughly 14 tons.

Fauxconuts are based in both plant an animal anatomy. They are very unique in that sense. They both eat things and absorb sunlight to collect their daily dose of energy. However, if they eat too much, the nutrients just leaks out of their mouth in a form of mucus that they can ingest later.

His mouth works similar to a venous fly trap in the sense that it encloses around his prey, and fills up with enzymes to break it down. He does always try to mercy kill what he is eating before he puts it in his mouth, but its hard for him to tell when the small animals play dead. It actually takes time to start digestion however.

When Fauxconuts eat sweets or junk food they turn into mucus as well but with a different color.

After an unspecified amount of time, Fuzzy will grow old and turn brown like all Fauxconuts. This is actually the process of turning into a seed that will eventually be planted on his Homeworld. he will then turn into a Astral Ent roughly the size of a redwood. though it is unlikley that you will ever witness that because it takes human lifetimes to even become a seed let alone grow into a tree.