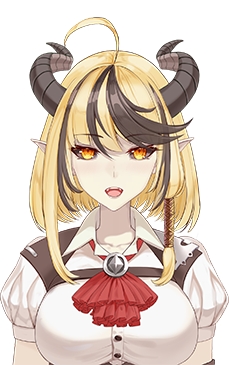 Malice is a Virtual Streamer on Twitch who mainly speaks English. Although, she knows some Spanish and very little German. It is said that she once took time to learn basic German and has forgotten most of it. She is also related to some Spanish-speaking demons, so she knows basic communication in that. Although, it may be best to just expect her to speak English as she's very simple at times. You can expect content such as Horror Games, RPG games, and basic collab games like Among Us and Minecraft with other streamers. Malice is also part of the stream team, The Purple Garden.

Malice is a humanoid, roughly 5'6'' tall. She carries an incredibly charismatic stance, holding her head high and broadens her shoulders in an admirable dignity. True to her heritage, she sports horns curling around to the back of her head. Much to her pleasure, the fiend blood tainting their veins is obvious. She denies that she is part elf and will swear to her last that she is all Sloth Demon. (This is the sin of sloth and not the adorable creature the sloth)

The reason and mechanism behind the conception of Malice is unknown. In general, Sloth Demons are born of the original sloth demon, Belphegor. However, although rare, the sloth fiends can deviate and neglect their human host, instead opting to go for a fey like an elf. In doing so, Malice was born.

Malice was passed off to others to take care of, swapped at birth like a changeling in the Middle Ages. Because distinct fiend features are not developed until later, she was raised by her parents unknowingly. Eventually, her horns came in and she was ousted from her home.

The name may believe one to think that being a sloth demon, Malice is lazy. Common misconception, as sloth demons just feed upon that part of the human psyche. Malice decided to start a Twitch channel for quicker meals, as food had became scarce during the year 2020 with everyone staying indoors. While viewers watch her channel, she's able to feed upon them. So, sit back, relax, and feed this orphaned demon.