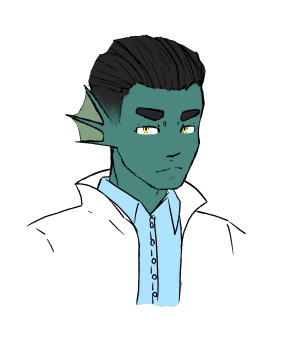 The Neronian is a Caribbean based Streamer who started streaming as a hobby. However, their love for content creation would push them further down the rabbit whole and inspired bigger projects in the future. Currently though, The Neronian streams Sundays, Wednesdays and Saturdays beginning at 8pm AST. There you can find him play a variety of games genres including but not limited to, Battle Royales, MMOs, RPGs and Tactical Shooters.

Deep within the trenches of the ocean, there lies a ship wreckage who's origins are not that of the earth. And, in that wreckage resides a being who was the sole passenger on said ship.

Nero, as he likes to refer to himself, is a researcher sent to observe and document the peculiar characteristics of earth. What makes it such a hotspot that beings from various realms, worlds, dimensions would visit such an isolated planet.

Or that was to be the plan. You see, being in this line of work, Nero has never taken a vacation. So as fate would have it, his ship had crashed due to colliding with several pieces of space debris. Not to mention being in such an isolated part of the universe meant that it would be nigh impossible to contact home. I'm sure he'll get around to his work eventually.