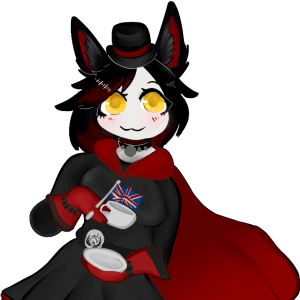 Terensu is a male Hoppou VStreamer who likes playing a multitude of varying genres of games, but enjoys playing scary games the most.

Coming into existence in 2018, Terensu first materialised into the world of VRChat after taking an extended break in 2010 due to an accident, he has been constantly challenging himself with both good and bad results, due to mainly having a high negative opinion of himself he doesn't have much faith in himself, nor does he build himself up to be someone else via imitation or replication.

Terensu on first look appears that of a Hoppou, but a mutation within his DNA removed the triangular horns on his head in place of ears more akin to that of a wolf, along with wearing that of a bowler hat of either black with red trim or red with black trim.

He has a strong sense of wanting to do things on his own rather then asking for help, he believes that whilst it is never wrong to ask for help, the accomplishment of doing it themselves holds up much more in the long run, not just because they done it themselves, but because they have a new skill to help them in the future.

Whenever live he has a bit of a loose cannon in terms of language within context to whatever game he is playing, but loves to engage with as much as he can with people in the community, whether live or in solidarity