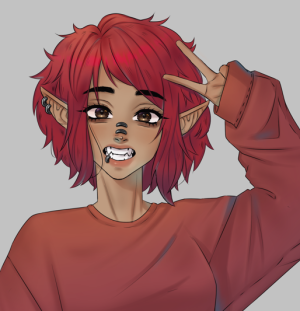 The Daughter of a Forest Nymph (her Mother) and Dragon God of the Sea (her Father), TD has inherited both traits of her parents. She can shapeshift into various animals, as well as a dragon. She has been observed using features of some animals from time to time without fully shifting (ex. wolf ears and tail, but no fur or snout). TD was raised by her Mother along a beautiful river at the top of a mountain in the forest. Her Father, the Dragon God of the Sea, left her mother before TD was born, therefore, she resents him and tends to disown her inherited hereditary magical abilities. Although she is an adult, TD has a "wild and free" spirit, often found playing with foxes, wild cats and wolves. She tends to be mischievous, as she has been caught several times biting other Forest Nymphs and misplacing their belongings when they aren't looking. Although most of her lore is lighthearted, there are some dark sides to her that are still being revealed as time moves forward. On one notable event, after being visiously attacked in a small village by a group of unknown raiders, TD discovered she had the ability to turn into a beast similar to what Human Natives refer to as the "Wendigo". This form has not yet been acurately documented, as those who provoked and witnessed it did not live to tell the tale. There are many mysteries surrounding TDTeasdale that may be revealed in the near future!