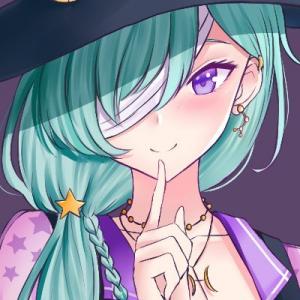 Tarot_XIX is a Virtual Streamer from Scotland who makes content in English. She is a witch who enjoys teaching viewers about Astrology and Natal Charts. Her birthday is February 25. She is 164cm (5'4). Her zodiac sign is Pisces.

Tarot is affiliated with the stream team VirtualOneesans.

As a young girl with an interest in fortune telling, she gained a reputation among the elite of the late 1500s as "the tarot girl". Many questions relating to illness leading to her taking an interest in medicine. She became an apprentice to a family friend in order to learn proper magic and healing techniques.

In her teens, however, the royal family called for the trial of any "witch" including medicine makers, fortune tellers, and others alike. The cards that predicted an accepting, prosperous future helped to give her hope and, with her mentor captured, she saw no other option but to flee. Her interest in the skies and growing skills allowing her to discover that a specific alignment of the stars and planets could create a connection between space and time. However, to use this to her benefit, she lost her eye in order to ensure that she could see the safest paths in to the future.

She escaped, taking the name "Tarot" to remember her past and hide her real identity as she travelled through many worlds and times to find a place that she could call home eventually landing in the modern day. She was taken in by a kind man interested in magic and technology who introducer her to the internet. Quickly, she became fascinated to what computers could do and uses them now as a means to spread her messages of good health and guidance to others.