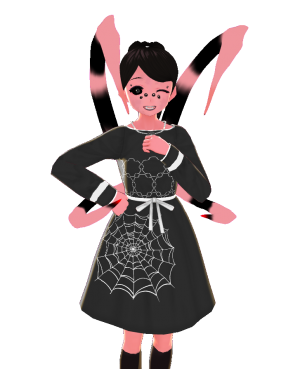 Tarantulip, more commonly known as Tulip, is a pink tarantula-based VStreamer who specializes in improv-based streams filled with banter with the chat and collaborators. As with many vstreamers and vtubers, Tulip is a variety streamer. However, her favourite game genres are Platformers, RPGs, and simulation games. Tulip also tries to incorporate lots of singing into her streams, with song request redeems being available for cheap at any given time.

Tulip was once an ordinary spider, living in a large, old mansion in the middle of a Canadian Forest. Tulip lived alongside her adopted Tarantula siblings, living in a display case in the middle of a large room filled with displays. The head of the house, the elderly collector, had bought spiders from all over the world to keep her company. Eventually, the collector passed away, murdered by a Witch who wanted to use the Collector's House and the Tarantulas that live within it for her experiment.

Tulip was the witch's first and only subject within the house. The Witch sought to create an army of mutated spiders to act as her army and wipe out mankind. When she tried to transform Tulip, she ended up with a largely docile and dim-witted creature. Considering her research to be a failure, the Witch set out to find a new collection of animals to transform into her soldiers, leaving Tulip alone in a house all by herself.

No longer able to relate to her adopted siblings, Tulip set out to find new friends as an online idol.