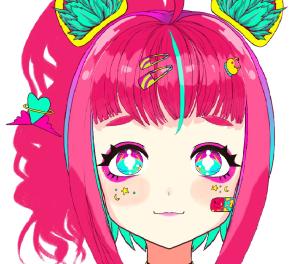 Tamachaama is a italian tanuki vtuber and artist with a female form, making content in English (and sometimes talking in Italian).

(the lore is not definitive and under modify, it will be completed with the re-debut).

During a hot summer of 1527, during a walk in the woods of the Roman countryside, a small Tanuki ends up in a trap created by humans who wanted to hunt wild animals, his life was in danger but a very strong magenta light intervenes between the tanuki and the hunters sucking him away.

The tanuki reopens his eyes, finding himself in a completely different, dystopian world, made up of many colors and gigantic buildings, his eyes begin to shine and he is captured. This tanuki is intercepted by a human dressed in an eccentric way and takes him with him to a quiet place where he explains why he is there.

"Your life was in danger and I couldn't leave you at the mercy of the barbarians, besides I saw something special in your eyes, I couldn't not bring you here" explained the girl who wears very strange clothes that intrigue the tanuki, the girl tells him that they find themselves in an alternative reality in Italy where Japan has changed the fashion in the world and where the big cities have adapted to the uses and customs and where the Tanuki are accepted animals, being able to transform themselves into humans.

From there the tanuki begins to live in this new place and transforms into the human form and integrates with the fashion of the new place, starting to love vaporwave and pop colors. The tanuki in his time also knew how to draw, having had an art master in a workshop in Rome who respected the tanuki and who taught him the basics. In the new world he discovers digital and new ways of art.

From here begins the adventures of Tamako, aka Tamachaama, looking for other creatures similar to her and inspirations. His dream, however, is to go to the homeland of his ancestors, Japan.