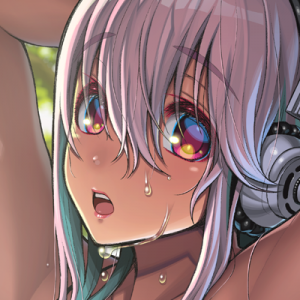 Super Sonico (すーぱーそに子) is a female Virtual YouTuber who makes content in Japanese. Her character is created by Tsuji Santa for the Japanese visual novel video game developer Nitroplus. Initially, she was the mascot for Nitroplus' annual live music festival event "Nitro Super Sonico" in 2006, but since then she appeared on across multiple Nitroplus media, including visual novels, video games, music CDs, manga, anime, toys, merchandising and her own vtuber channel. Her birthday is 14 October. Her height is 158cm (5'2"). Her zodiac sign is Libra.