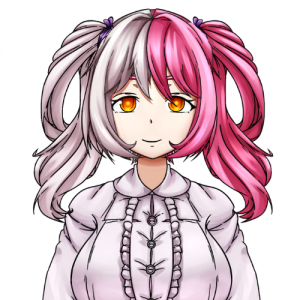 Fanta-C: 1st Generation | The Resurgence, Sumire Fuji is the 4th member of 1st Generation/ Wave of vtubers & vstreamers under Pearl Orient Production. She is specialized in voice-acting and game commentating.

Sumire Fuji was a Magical Girl powered by different gemstones; Amethyst, Kunzite, Garnet, Aquamarine, Ruby, and Obsidian. She handles all the work of a hero by fighting monsters from other planets and galaxies to avoid a galactic crisis. She calls herself a Fuji Fille Mahica as she lives in a local city near Mt. Fuji back then.

She got her powers by the legends of her elders that once a girl was born with half white and half pink hair, her destiny will be something different that no one will even expect it. So she believed and prayed every night until she saw six meteors falling fast on their local forest. That time she was scared, she tried to run fast heading towards the woods to see what happened, and then she found gemstones of different colors. The Gemstones became various-shaped accessories. Sumire Fuji tried to wear one until she transformed into a magical girl. The gemstones' real purpose is to find six hosts to wear them and give them different kinds of powers. But Sumire Fuji found it alone, so she became a powerful immortal.

Until that time, Sumire Fuji ventured into the galaxy to fight monsters. Sumire Fuji spent years roaming around. She then encountered the strongest monster there. Knowing Sumire, she was fearless and defeated it. The fight caused an enormous explosion that blasted her away afar from the current galaxy her in.

She was falling beyond the skies to an uncertain planet noticing that she doesn't have the gems anymore besides the obsidian which is the power of courage. She was about to hit the ground but luckily there was someone who caught her. It was a boy with a wolf-like appearance who's accompanied by a girl with cat ears and a boy with an elegant white suit. She woke up remembering nothing about her being a Magical Girl nor can she not recall any memories at all. So that's why she was invited to join "The Resurgence".