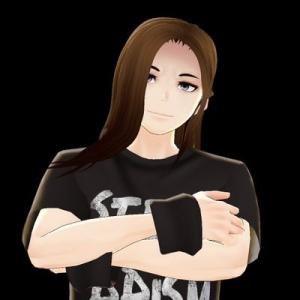 Steel Prism is an American male VStreamer/VTuber who makes content in English. He is incredibly energetic and a "24/7 hype machine" who is here to "hang out, make friends, listen to metal and have a good time." Every month (normally the first Saturday of every month) he has a community night where he will hang with his community and watch media submissions, play Jackbox games, and hang and chat with everyone.

His content primarily focuses on playing RTS (Real Time Strategy) games, FPS games, Virtual Reality (VR) games and VRChat. His content is also focused on heavy metal music, which he plays in the background of most of his streams, and will occasionally listen to entire albums on stream with viewers while just chatting. He also occasionally will do covers of metal songs, most of which contain lots of screaming.

Steel's passion for heavy metal music began when he was in high school and saw some people performing a cover of "Judas Rising" by Judas Priests, and was immediately hooked. He went to a sheltered private school, so he was never exposed to that kind of music before. Steel has a love for strategy games, both real time and turn based. He has also been playing FPS games for many years and loves playing games with friends.

Steel is known for being a metal vocalist, and has been doing screaming vocals for a few years, but has been known to do a little normal singing. His biggest inspirations for vocals are Tom Barber from Chelsea Grin (ex-Lorna Shore vocalist), Phil Bozeman from Whitechapel, George "Corpsegrinder" Fisher from Cannibal Corpse, the late Mitch Lucker formerly from Suicide Silence, and Matthew Tuck from Bullet for my Valentine.

Steel's all time favorite band is Black Sabbath, as it was the first metal band he seriously listened to. His other top favorite bands are Whitechapel, Megadeth, Suicide Silence, and Metallica. His favorite subgenre of metal is Symphonic Deathcore, but loves and respects all kinds of metal. Other subgenres he loves include deathcore, metalcore, symphonic metal, melodic death metal, and slamming brutal death metal.

His top 5 favorite albums (in order) are: Ride the Lightning by Metallica, The Valley by Whitechapel, Master of Reality by Black Sabbath, Luciferous by Enterprise Earth, and Ultu Ulla by Rings of Saturn (with an honorable mention being No Time To Bleed by Suicide Silence).

While Steel primary listens to heavy metal, he enjoys other kinds of music, such as mid-2000s emo music, dubstep/EDM (preferably early 2010s dubsteb, but will listen to modern EDM), some K-Pop and a little bit of American pop music. He hates country and most modern rap music, but respects all genres of music as he acknowledges the work and passion that was put into them, and respects that greatly.

To sum up everything using his catchphrase, "I'm just a metalhead"