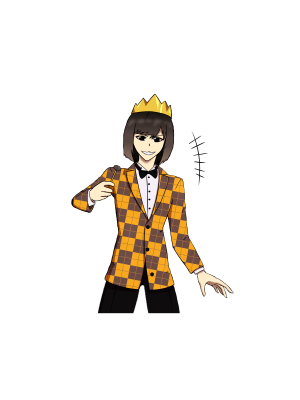 St.Powers is a Vtuber who makes a wide variety of content in English, he has been known to speak Spanish from time to time however he can't uphold a conversation in it. St.Powers began growing in popularity after beginning a certain form of interviewing content, in which he would invite other Vtubers in the community to come on for an interview that would usually last upwards of an hour. Though, lately the interviews have been getting longer and longer as he's gotten better at making friends with people in a short time span, making the conversation much lengthier. Recently it appears that he's been ebbing in and out of the interviewing content for other forms of content such as; Music streams in which he'd play piano or make songs for people, or small collabs with his friends. They are a friendly person who always enjoys jokes and fun, not to mention they are exceptionally handsome if I do say so myself xDD

St.Powers was once the prince of a Holy Kingdom called Turisk, his father was an excellent king but he could never make time for him, causing St.Powers to feel outcasted and alone everywhere he went. One day, after his father had collapsed of lung cancer and his mother perished in a fire inside the garden they used to play in, he decided he didn't want to live with the pressure of a kingdom behind him and took the last marigold flower from the scarred garden that his mother perished in before running off to find an old, weathered book hidden within the ancient catacombs of the castle. After doing the ritual contained within, reality cracked apart in front of him and dragged him in with its tendrils. He ended up in modern day UK and now lives in a back alley with his gang of raccoons called the R.A.C (Raccoon Assistance Coalition). The marigold flower he had brought with him turned into a beautiful luminescent jade in full bloom for some reason, he had no idea as to how this happened but St.Powers didn't linger on it for long. He looked out into the vast world that he was now apart of and held aspirations in his heart for a brighter future, while there may be bumps and obstacles aplenty in his new life, he swore that he'd live happily until his final days. If they ever came of course. Unbeknownst to him, he had already begun to drift off from normalcy after breaking the space between worlds. This worlds God would never accept him into the afterlife, he wasn't one of his own people after all, what right did he have to be treated to an afterlife like them after death? Thus, he was unknowingly cursed to live forever, never to have the final rest for his soul as he began with a fresh new start in the world. Welp that's the lore anyway xDD I hope you enjoyed! I'm not sure if anyone's reading this but if you do then I hope you liked it! Since you've read this far, dropping me a follow on Twitch wouldn't hurt would it? LMAO