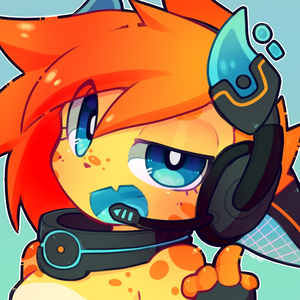 A Sprite addicted Solarkit Vtuber from the US, Citrus is a variety streamer. She plays games, watches movies, watches YouTube, and chats with her viewers. Citrus tends to be chat/interaction focused; thus the more lively chat is, the more lively she is in return. She makes use of items and scenes to create various comedic effects and outcomes in her streams. Citrus is immunocompromised and gets sick often. She also has a chronic cough that is left over from her COVID-19 infection, and can be heard coughing regularly. Getting her to laugh generally causes her to cough.

Solarkits are a cyborg race created to be human companions in a dimension very different from our own, where science is more advanced. Citrus had her design based off of Shark DNA, and although her creator has mentioned they do not have a specific shark on file, Citrus has always claimed to be a "Lemon Shark". Whether it is a play on lemon as a fruit or an actual lemon shark is unclear. She was created in London, UK before crossing the pond to the USA where she currently resides. She spend time wandering and has had a multitude of jobs. Citrus was eventually adopted by a woman she calls her mom who also adopted five other Solarkits, who Citrus calls her sisters. Currently, Citrus lives away from her family. She eventually began to call this dimension regularly and got stuck in between both. Due to this; her cells are degrading and her immune system is failing, causing her to become ill often. Despite this, she continues to call. She loves interacting with people and loves to make them smile. Even though she may one day end up entirely trapped in this dimension.