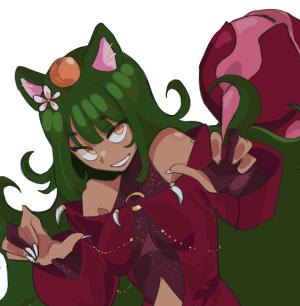 A former tokusatsu villainess streaming part-time in between helping her team save the world!

As the Earth formed and began to develop life, a beast formed within its molten core as an amalgam of all that began to grow on it's surface. In the modern day, the beast known as DaiChimera no longer satisfied with accepting parts of itself forming and going extinct, wishes to snuff out all life on Earth's surface to begin again. DaiChimera began to split off parts of itself to facilitate this end.

Along with many smaller monster, it created three generals; NanaNana, a jackalope tactician to direct it's troops, EmiRingo, a gryphon battle master to give the troops power, and SonoMikan, a manticore spy to learn the weaknesses of the surface that they could exploit.

After years of shifting forms and learning about the surface it came time to spy on humans. SonoMikan decided the most efficient way to learn about humans en masse was to take a form they'd find appealing -- A cute cat girl. -- and become an internet celebrity. But after a year of growing her audience and learning more about humans decided that she actually enjoys them and their culture. In that moment she decided she no longer wanted to take part in destroying the world as it is and instead wanted to continue living as part of it.

After forcing all of her left-over energy out to remove her disguise, she was run out and hunted by DaiChimera's ComBeasts. Weakened by her lack of energy, she was overwhelmed by the fight, but was rescued by Green, one of the human heroes fighting against DaiChimera. After the battle when they realized she was one of the generals, they brought her back to the rest of the team. Red and Blue were wary of her at first, but at Green and Pink's urging, SonoMikan promised to used the information she'd gathered to help the team predict where her former boss might strike next.

The team built her a home in the cave where their mechs were stored and she vowed to help them save humanity. But because she became so fond of the humans she'd been live-streaming to, SonoMikan decided to continue being a streamer in between missions!