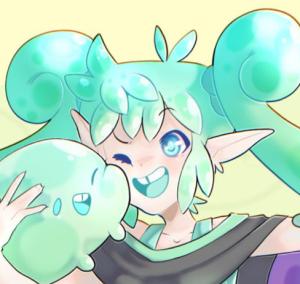 Slimu is a primarily English speaking slime VStreamer! She streams mostly on Twitch, but is working to expand to other mediums! Slimu likes to collab with close friends and other members of the slime-vtuber community! She is a variety streamer with a focus on Live2D model rigging, art, and multiplayer games with friends! Slimu is also a self-made VTuber, everything on her streams she worked on and made herself from her BGM to her overlays, Live2D models, and art! Her goal is to provide a soft community that helps each other and gives a safe place to just chat, joke around, and yell inside jokes at each other! She has been described as a surprisingly good voice actress and has used her abilities to trick friends in games like Among Us! You are always welcome in her streams and she will accept you into her adventuring party with open arms! Slimu is also working on learning Japanese, she just started!

Slimu currently streams on Twitch but an official debut is coming up soon!

Will be revealed once the official debut comes! Date pending due to conflicting schedules!