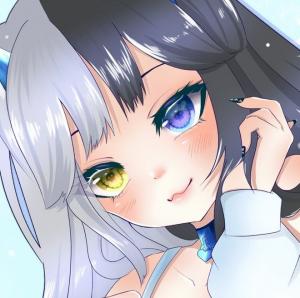 Mio is a demon cat Virtual YouTuber who streams a variety of games and does freelance graphic design and art. She descended from the realms of the clouds.

Mio is a once-powerful demon catgirl from the realm of the Clouds. One day, a divine hunger came over Mio as she entered her Chaotic mood, and she descended from the Clouds to feed on the wretched souls below. To better understand her prey, she took to the internet in search of information on their weaknesses. She watched twitch Vtuber streams to learn the speech of mankind, and easily adopted their many complex linguistic terms such as “poggers” and “pepelaff”. However, the more she watched the streams and the more she learned about her potential quarry, her motivation to hunt diminished. Finally, on a stormy day tucked away in her home, the rain pattering against the windows and the comforting sounds of the Twitch stream in front of her, Mio’s demonic powers fled her body. Her hunger for human souls has locked away deep inside her, replaced by a new desire: becoming a Vtuber.