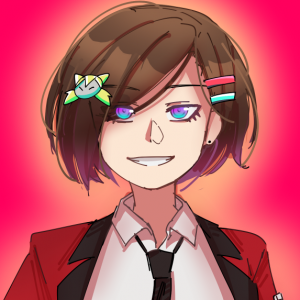 Zoey is a mute female vstreamer on twitch. Previously making short comics on twitter, she now occasionally streams various shooter games on twitch. She is a one of many Commanders from the game Girls Frontline

Zoey is your average human Commander serving Griffin and Kryuger Private Military Company and Security Consultant Company. Although being employed in a PMC, she can be quite clumsy and ultimately lazy, and got the nickname "Slacker Shikikan Zoey" by her colleagues.

Zoey got fired once for abusing the usage of Hacked Military Androids to do her work while she draws comics for social media in her room. She eventually managed to get re-employed with the exchange of all her old military dolls memory getting rewritten. Ever since then she has "worked hard" to befriend all her previous dolls.

Zoey attempted to stream once, mid 2020, but due to the unstable connection from her base in asia, her microphone audio doesn't get transmitted, thus resulting in her mute streams.