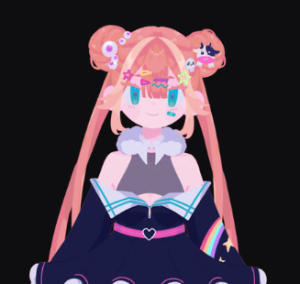 Six is a variety content creator who primarily plays games on Twitch. She often times roleplays a character trope on stream referred to as "chūnibyō", roughly translating to "Eighth-Grader Syndrome" in English. Her content is geared to be 13+. Her canonical height is 4'9" and she is a member of Nyathm Live, Gen 1: Anarkhia.

Six plays a façade to her viewers, and activity lies to them about her lore. She states that she has always been on Earth, and is actually a Princess. In actuality, Six was a creation alongside nine other vessel's. She was given the job title of "Star Watcher" and was told to watch two stars, which were never given names. She ended up playing some pranks on the other vessels, and ended up being sent to Earth as punishment. The other vessels promised they would be back, but they never did. She turned to streaming and the internet as she believes she can contact them if she tries hard enough, yet she would never tell her viewers the truth.