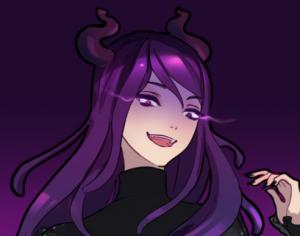 At the beginning, fear lacked shape. It was a thought, a prickle at the back of the neck, an uneasy feeling, a paranoia, or a self-tormenting doubt. It was the darkness, the unknown, the perilous, the unseen. In the same fold, it was the wonderful, the miraculous, the uncharted, and the unimaginable. When adventurous spirits took to discover the vastness of the world, their greatest fears started to take shape. The worst of their imagined fears gave birth to Siddi as a sentient life. She became their greatest challenge: the Final Boss.

After surveying the world, Siddi discovered the great plains of the current day United States midwest to be an ideal location to call her base of operations. She placed her mountain at the center of the continent, with a vast multitude of minions occupying each of its nooks and crannies. She collected treasures and placed them on each floor, leading to the very top where she called her home. With time, most adventurers with the sight to see this other-dimensional mountain would venture in, defeat a few of the low-leveled minions, steal the loot and take off. Each time a room was emptied of its treasures, Siddi would replace it. However, treasure is finite. Eventually those rooms started to house practical nothings, including second-hand goods, with a touch of her enchantment to make it a magical item. Even then, the Final Boss was going broke and the lack of challengers were making it all too tiring.

It was around this time that Siddi started to notice the expansion of humanity. The world had shrunk, or perhaps humans have just overtaken almost all of it. The flat, empty lands surrounding the mountain was now littered with teeny tiny homes, and people were "domesticated." Not many held the sight to even see a giant, ominous mountain sitting smack-dab in the middle of suburbia. It wasn't all a loss. A lack of challengers meant a very little need to go out of the way to placate the adventurous spirit. It also meant there was room for other hobbies.

As carriages turned to cars, Siddi started to get a whiff of unfamiliar scents. Borrowing a human flesh suit (a human with a sight but no real adventurous spirit to occupy), she ventured out to seek out those smells. This is how the Final Boss was introduced to the first kitchens, delicacies from abroad, heavenly spices and something even newer--food. Since then she has loved to taste every kind of food and has explored a wide variety of culinary delights. She even dabbled in cooking herself. Her self-proclaimed second-in-command, a headless human on first glance, has aided her in discovering new recipes as well as exploring her new found hobby.

Fast forward to today, and Siddi has discovered the wonders of the internet. Movies, songs, anime, art and memes were only the start. Through the aid of her Dungeon Maid (who she created herself, much like most of her minions), she utilizes a rather wonky dimensional gate to broadcast live across the world. She interacts with would-be adventurers, who she sees as slimy blobs through the dimensional gate, shares her recipes, her love for various food types, love for games, her own art and is placated by interacting with adventurers. Her on-screen personality can be described as a chaotic mixture of Tsun-Yan-Kuu and Kamidere. She is also very vocal about her hatred for water, and bad games. Although most would say she's just tormenting the adventurers, it is keen to note the Final Boss is more often-than-not is bullied by the adventurers themselves.

As of August 2021: The modern-day fears are still continuing to fuel her. Her current appearance is that of a small human, a female, with horns and fangs. She has clarified to her viewers that she is conforming her flesh to look like she wears clothing, although as a monster, that's unnecessary. Without that clothing, her body is littered with dark, miniature black holes. As a monster, Siddi is gender fluid but is accepting of being referred by title, she/her/they/him/daddy. After teasing about having tentacles for some time, she has most recently revealed her second-form. In that form, she is lifted up to a looming 12 feet in height (365.76cm) by an unconfirmed number of giant tentacles. Each of the tentacles seem to be fashioned out of the night sky. As of now, she has hinted at a third form but has not shared any further details.