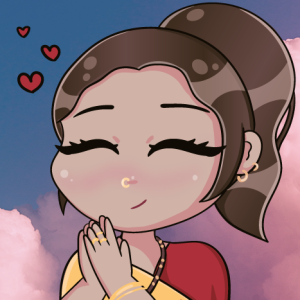 Shruti is a female VTuber who makes a lot of content focusing on South Indian and Greek culture. She speaks Greek, Hindi, and English although most of her content is in the English language. She also streams regular language learning content (Hindi, Telugu, etc), mixes music live on stream, and occasionally plays games. She has various hobbies and enjoys sharing them with her audience. She is very active on Twitter and Discord. She enjoys interacting with her audience, and can often be found forgoing the planned content to hang out or otherwise have a fun time with viewers.

She is quite literal, and is oftentimes easily confused by simple tasks because the directions are too explicit in what should be done. This can lead to many interesting and comical interactions with her chat as they try to give her instructions and tips when she is playing a game she is unfamiliar with (she does this often and enjoys the banter with her audience). Whilst born in India her family relocated to Greece when she was around 6 years old. They then moved to the United States after she finished her high school education and she has lived here since in the Midwestern region.

Shruti is a software engineer specializing in C++ and has talked about developing various software from employee management systems to web-based applications, and will often make references to her career on stream. She has a strong interest in physical and digital security, linux and unix systems, and anything involving programming.

She has also mentioned that she is a trained Carnatic flautist and often shares her favourite South Indian composers and performers in her Discord server. She loves all types of music, and always encourages her audience to share their musical preferences with her and one another to help broaden everyone's musical horizons. Shruti is a practicing Hindu - Shaktism - and she is an active advocate for the benefits of the various types of yoga (mainly nada, raja, japa, and jnana yogas) and other traditional Indian practices.

Shruti does not appear to have any lore as she is a reflection of the real person who is behind the model. Shruti has said that she chose to become a VTuber to help her overcome her social anxiety, and has commented various times that she finds the process to be helpful and rewarding.