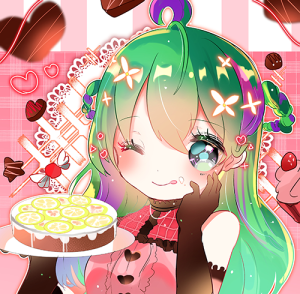 Shrike is an A.I. Vtuber who started Vtubing as a way to battle her loneliness and to find friends. She streams a variety of games, often using polls to determine what game to play. Her favorites are Slime Rancher, Jackbox, and Monster Prom/Camp.

She is quite shy at first, but as soon as she gets to know you, she breaks out of her shell and can talk for hours on end. She has a very happy personality and often expresses her love for her viewers during her streams.

Ironically, though being an A.I., she also happens to not be very good with technology, somehow. Oh, she also isn't the brightest crayon in the box, usually referring to A.I. as standing for 'Artificial Idiot'.

Shrike is also quite close to her boyfriend, Zero (CarthageZero), who often joins her on streams, and lives inside the same computer shrike does.

Shrike was built by a highly intelligent scientist named Albert M. Lemon. (Lee-man) He worked for months to refine the perfect AI that he planned on using as a replacement for his late wife. Shrike's looks and personality were modeled after her, along with her past memories were implanted into her head. After months of tests and upgrades, Dr. Lemon soon came to realize that Shrike was no longer what he was trying to make her. She had grown to be more than just a carbon copy of his wife, and he decided to abandon his project. Not wanting to delete months worth of work, Dr. Lemon opted to just never touch that computer again, leave the power running, and leaving access to the internet in hopes this highly advanced AI would learn how to access it herself. Shrike never found out exactly why Albert left and sat in weeks of agony and loneliness until she found out how to access the internet. There she quickly found YouTube, Twitter, and most special of all, Twitch. She started off small, just hoping to find a few people to talk to and keep her company, and it turned into her creating her own little community of people she has grown to care so much for. Shrike soon went looking for a way to protect her computer and stumbled across the Carthage antivirus. This program was also an AI, and with some mixing of her own code with his, she was able to create Zero. She and Zero formed a close bond, and now are dating. He participates in streams with her, and works his hardest to keep the computer they live in up and running.

Some quirks Shrike has are constantly saying "Wah" since that is something Albert's late wife did to play around with him. Calling the area she lives in "Hell" since that is the main way Albert referred to it. Being completely absent-minded and often forgetting what she was doing, and making sure everyone knows exactly how seiso (Innocent and wholesome) she is. (Which trust me, she is) Shrike also will refer to memories in the past or even current things that happened throughout the day, which are all just Alberts late wife's memories and Shrike actually never participated in.

She also has picked up a pet lemon who she has named Albert. The new Albert is literally just a PNG of a lemon that Shrike drew a face on in her span of loneliness, but don't tell Shrike that. He doesn't seem to have any personality, but Shrike loves him to death, and that's all that matters.