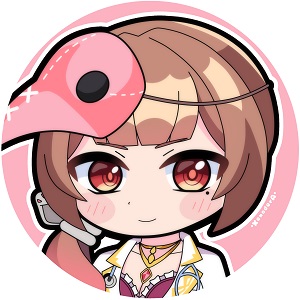 ShioriPon is a doctor and an ENVtuber from the Philippines who streams on Twitch. She plays a variety of games, but has a preference for FPS and zombie shooters. She also does monthly medical education streams to educate viewers about surgery and the medical field.

She uses two models: CasualPon for gaming, wherein she wears a pink and white striped hoodie and a red and black skirt with black and white striped socks; and Doc Shiori for chatting and educational streams, wherein her hair is tied up into a ponytail with a snake ribbon, and wears a white coat.

ShioriPon’s height is 165cm and her birthday is December 16.

ShioriPon is a full-fledged doctor in her 20’s and recently applied as a surgeon. Everything was fine until she performed her very first surgery, which was an appendectomy (removal of the appendix). She became elated at the sight of her patient’s blood the moment she made her incision. She admired the anatomy she observed as she was performing the surgery, until she discovered that the patient’s appendix was ruptured. Disgusted at the gruesomeness abnormality of the ruptured appendix, she removed the organ and rid of the abdomen any pus collections. It was a successful surgery.

Ever since then, she would become excited whenever she had surgeries... too excited. She loved the gratifying gore that came with performing surgeries on patients. It became innate to her to eliminate anything that was abnormal. For the safety of the patients, she had to find a way to divert her inner lust for gore.

She then decided to become a vtuber/vstreamer on the side, playing FPS games and especially zombie shooters. The games DOOM and DOOM Eternal were her favorites.

ShioriPon's success as a surgeon made her many enemies who were envious of her achievements. One night, after a tiring day at the hospital, she was so exhausted that as soon as she arrived home, she fell into a deep sleep. Upon waking up, she discovered that she was not in her room anymore, and that she had been transported back in time, to the era of the Black Plague. Accepting her new fate, she continued her medical work, now as a rogue surgeon.