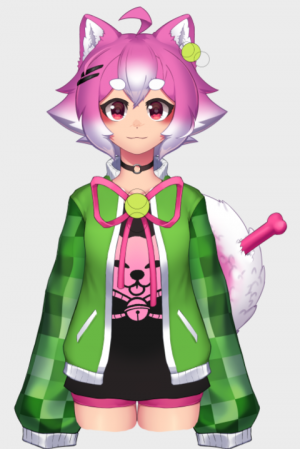 Tenten is friendly and highly energetic, albeit somewhat dim-witted and an airhead with a personality that best matches a hyperactive dog. Her energy and excitement over small things is contagious and she often breaks the silence or serious moments with jokes, laughter or playfully snide comments. She struggles to read the room and fails miserably at most things, but always bounces back with infectious determination.

She is fiercely loyal to 'Ona-San' with an apparent distaste for cats, always striking up rivalries with any feline VTuber's she interacts with. Despite Tenten's lack of critical thinking and common sense, she can be quite sarcastic and quick-witted when it comes to her peers as she loves teasing and bullying her friends, yet always making sure that it stays light hearted and never oversteps any boundaries. This however often leads to her being teased in return, which Tenten doesn't deal with well.

Tenten has an interesting view of life from a dog's point of view, often expressing confusion or amazement at the most simple things. She is easy to please and impressed by any minute skill. She will often strike up conversation about what happened in her day as dog, mostly noticing her hatred of the postman and smelling other dogs when her Owner returns from work.

Tenten often repeats a personal mantra of, 'It doesn't have to be perfect, just OK' to herself and viewers. This is because she struggled a lot with perfectionism in her artwork which would bring her mood down, and she refuses to let herself or viewers be affected by the same negative mindset. She often asks her viewers for treats and headpats.

Tenten is the loving pet dog of her beloved 'Ona-San', an exhausted night-shift worker. Little is known about Ona-San, apart from the fact she collects anime figures, manga and is a retired professional gamer- Leaving her equipment to be used by Tenten during the night unbeknownst to her.

After a chance encounter with a magical creature looking to bestow its powers on an Earth girl to become a Magical Girl, the ability was bestown upon Tenten instead. She was given a human form, human intelligence, the ability to change back and forth whenever she liked, and a 'black hole' like tail that can store and retrieve as many items as Tenten desires.

However, instead of taking up the duties of a magical girl, Tenten used her new ability to take up gaming as she wanted to fulfil her owner's lost passion for gaming, and hopefully help support her to. Ona-San does not yet know of Tenten's powers and has yet to see the human form, as Tenten wishes to keep it a secret out of fear of being rejected.