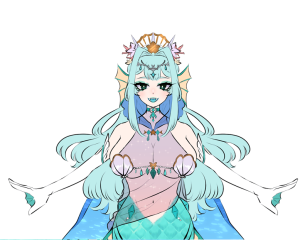 Shellsea is a female mermaid vtuber that is Queen of the Ocean! She likes to make friends and keep things lively and energetic especially for those new to her community. Shellsea streams in english and is typically found playing roguelikes, horror, or doing activities with her community. Her current model used to belong to Amphi_VT (which she is the owner of), which is being used until her 2.0 model is ready for debut.

Once upon a time, Shellsea was previously known as 'Despina Nova' who was quite literally, the universe. Much like the moon is connected to the tides, the goddess of the universe had to watch over the oceans as well to make sure everything was okay.

One day upon visiting earth, she gently came down on the water where an injured little jellyfish floated to the surface, crying for help. “Can anyone hear me?” The jellyfish cried out. “I can hear you, whats wrong little jelly?” The goddess inquired.

“Why are you always so far away? Why isn’t there someone closer to protect us? I want to protect all the small fish in the sea but I can’t do it alone.” The jellyfish responded.

The goddess felt sympathy for the jellyfish, and felt bad that there wasn’t someone big and strong to take care of the small ones in the seas. With one last look up to the heavens above, she strengthened her resolve and slowly sunk herself into the water, changing her body from that of a ‘human appearance’, to that of a mermaid. Her legs became one, turning into a tail, and her staff turned into a trident, grabbing an anchor nearby and planning to use it as a shield. Nova said goodbye to being the goddess of the universe, and said hello to Shellsea: Queen and Protector of the Ocean.

The ring around her tail determines if she has a tail, human legs, or both depending on the angle it is turned at.